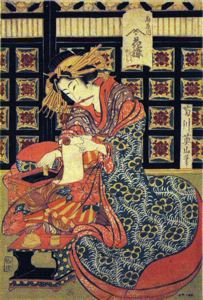 These five oiranâa term that refers to the most elite rank of prostituteâwere famous in their day, not only because of their elegance and sophistication, but also because the owner of their brothel was a well-known, influential personality about town. Their brothelâs name was Ogiya, which means âFan House.â These oiran were like celebrity fashion models, and the people of Edo admired their stylish way of wearing their hair and kimono. They also admired them for being able to read, to write using excellent calligraphy, and to be conversant in poetry and literature. Each courtesan is named on the prints. At the left, holding a book, is Hanado. Next, Tamino adjusts a hairpin, and in the center Hanazome grinds ink and clutches a calligraphy brush in her teeth for writing on the scroll she holds in her left hand. Hashidate looks over to the courtesan Takihashi in the print on the right, who holds a long tobacco pipe. Each womanâs sumptuous kimono is secured by an obi that is tied in front, as is customary for prostitutes of all rank.
Last Updated: 8/6/2013

Your current search criteria is: Object is "The Courtesan Hanazome of the Ogiya reading a letter and grinding ink".