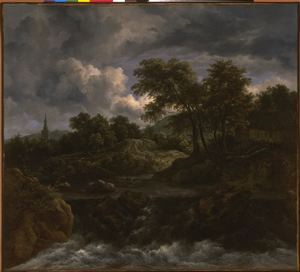 Wooded Landscape with a Waterfall

Landscape painting was among the principal developments of the 17th-century Dutch school. The artistic patrons of the Dutch Republic rejected the subjects long favored by the Catholic Church and the aristocratic courts, and images of the characteristic Dutch landscape served to assert local pride. Jacob van Ruisdael was the supreme practitioner of Dutch landscape painting in the second half of the century, but many of his later works, including this canvas, turn away from the
accurate depiction of the broad, flat Dutch plains. In the 1650s, Ruisdael visited the Romantic landscape of the wooded hill country in Germany, and he was also much influenced by the paintings of Allaert van Everdingen (1621â1675), which often depicted the waterfalls of Sweden. Whatever the source for his dark, stormy scenes of the 1650s and 1660s, Ruisdael paintings emphasize natureâs powerful aspect. In this example, the church in the distance and the half-timbered house at right seem minor in comparison to the rocky foreground with its raging waterfall.
Last Updated: 6/11/2011

Your current search criteria is: [Object]CurrentLocation is "@galleries@" and [Object]Display Artist is "Jacob van Ruisdael".