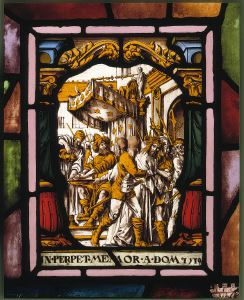 Best known for the portraits that he painted after moving to the court of Henry VIII in England, Hans Holbein the Younger also created a large body of sacred art, both as a painter of altarpieces and as a designer of stained glass windows. The production of painted glass was widespread in Renaissance Germany and Switzerland, and virtually every artist of note created glass designs. The windows were then executed by craftsmen who specialized in the medium. Holbeinâs drawings of these compositions, which were used to produce several sets of windows, are today in the Kupferstichkabinett, Basel. The drawings are usually dated to around 1528, and the date of 1519 in one of the windows probably refers not to the moment of the windowâs creation, but instead to the death year of a donor whose bequest could have paid for the building of a chapel which the windows would then have adorned.
Last Updated: 5/18/2021

Your current search criteria is: Portfolio is " Decorative Arts" and [Object]Century is "17th century" and [Object]Obj. Type is "Stained Glass Panel".