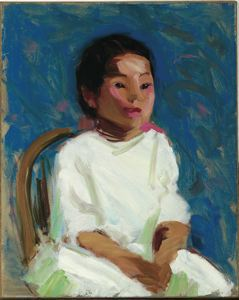 Born Robert Henry Cozad in Cincinnati, Ohio, Robert Henri changed his name to avoid association with a family scandal. Over his career, through his teaching, Henri inspired a generation of artists. He taught informally at gatherings at his studio and also at a number of noted East Coast art institutions, among them the Pennsylvania Academy of the Fine Arts in Philadelphia, and in New York City at the New York School of Art and the Art Students League. His lectures were published as a book, The Art Spirit, in 1923. The book offers a testament to Henriâs passion for art and reveals an earnest commitment to creating portraits of ârealâ people and environments. Henri rejected the notion that painting should be limited to landscapes of natural beauty and portraits to depictions of only the upper classes. Far from a society portrait full of glitz and glamour, Mukie shows a young girl without fanfare; it was painted during a year in which Henri spent time in San Diego.
Last Updated: 7/18/2014

Your current search criteria is: Object is "Mukie".