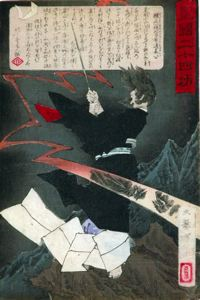 A revered scholar and poet who rose to prominence in Japanâs imperial Heian court, Sugawara no Michizane (845â903) died in the remote province where he had been exiled as a result of court conspiracies. When his enemies at court began to die untimely deaths and the capital besieged by thunder, lightning, and other natural disasters, an oracle determined that the ghost of Sugawara no Michizane needed to be appeased. A shrine was built in his honor and he was deified as Tenjin, a god of thunder. In 1746 a play called Sugawara and the Secrets of Calligraphy premiered in Osakaâs puppet theater, and it was so popular and moving that a contemporary source states that the price of tissues rose markedly. The following year it was adopted for the Kabuki theater.
Last Updated: 8/5/2011

Your current search criteria is: Object is "Sugawara no Michizane praying for rain on Mount Tenpai".