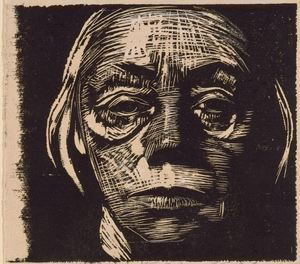 AF, 2021
Kollwitz achieved recognition with her series of lithographs The Weavers (1897), documenting the 1844 Peasant Weavers Revolt. She was the only female artist in the Berlin Secession (Die Sezession) in 1920 when she began her friendship with Ernst Barlach. Thereafter she worked predominately in woodcuts and sculpture, capturing a sense of vitality and expressiveness in response to the trauma of World War I and its aftermath of dire poverty in the Weimar Republic.


The unblinking eye and objectivity that Kollwitz turned on the urban poor would also be turned back on the artist herself in a series of remarkable self-portraits created over the duration of her career. The present work is among the most direct and powerful of those images. What is more, it highlights Kollwitzâs work as a master printmaker, one of the greatest of the twentieth century. She worked in lithography, etching, and, as in the present work, woodcut. For all of the apparent roughness of the medium, however, even woodcuts were subject to careful refinements, as can be seen in this print. A proof state of the woodcut, Kollwitz has added a series of strokes in white paint, particularly in the right cheek, indicating changes that would be made to the woodblock for later impressions of the print.
Last Updated: 5/12/2021

Your current search criteria is: Object is "Self-portrait".