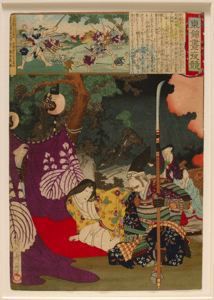 The great Japanese general Kato Kiyomasa kneels next to women he rescued from the burning Fushimi Castle of which we can only see the smoke at the right of the picture. Although Kiyomasa was imprisoned after his failure to successfully invade Korea, his heroic actions during the earthquake and fire at the Fushimi Castle earned him much honor and respect. In his characteristic full-body armor and holding a naginata (halberd-like pole weapon), Kiyomasa displays the qualities of a true Japanese hero. Famous heroes like Kiyomasa were glorified in the Ukiyo-e prints of the Meiji period as a counterpoint to the growing westernization and modernization of Japan.
Last Updated: 2/16/2011

Your current search criteria is: Object is "Kiyomasa kneeling next to women he rescued from the burning Fushimi Castle ".