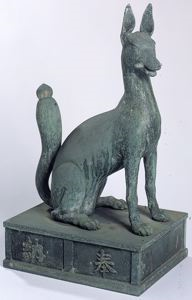 November 2004
Asian Tastes Installation
A pair of foxes often flanks the entranceway into the shrine of Inari, the rice goddess. Inari is the kami (spirit) that presides over matters of the harvest and, by extension, over matters of business and economic livelihood. The foxes' job is to carry the wishes of the faithful to the Shinto deity. These two foxes from the Taisho period are cast in bronze and signed by Shirai Nobutaro. The use of bronze and the signature of an artist suggest that they were commissioned by a wealthy patron.
Last Updated: 9/14/2013

Your current search criteria is: Object is "Shinto Shrine Fox".