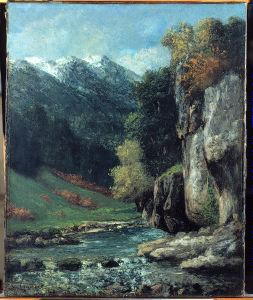 Gustave Courbet was a revolutionary who was recognized as much for his politics as his painting. He was a controversial artist, who challenged the academic rules that dictated appropriate subjects and acceptable techniques of painting.
During the Commune, the radical government put in place after the Franco-Prussian War, and the civil war that followed, Courbet struggled to save the Louvre, the national museum and symbol of Franceâs artistic heritage. He was, however, held responsible for the destruction of the VendÃ´me column in 1871, an act of protest against brute force and false glory. He was sentenced to six months in jail and was excluded from the Salon of 1872. To avoid paying the replacement cost for the destroyed monument, Courbet fled in self-imposed exile to Switzerland, where this canvas was painted.
Last Updated: 5/21/2020

Your current search criteria is: Object is "Landscape".