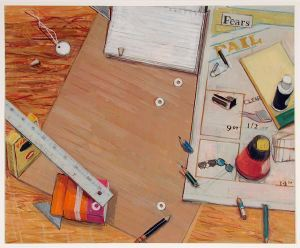 Betti-Sue Hertz: February 2002
Beginning in 1973 Manny Farber introduced representational imagery to his abstract painting style. His works from this post-abstract period adhere to the randomness and allover compositional styles of his earlier work. The relatively flat planes of color are the surface for an array of objects and notations, most of which correspond to the real props and tools of his life. The tilting of the space is an honest record of the paintingâs execution â Farber paints on paper or board with the objects, which are his models, arranged on the flat surface. For the Stationary Series he was thinking about the things on his deskâstationary, inks, post-its, erasers, pencils, rulers, and writing tablets. These visual diaries of his world are transformed into tabletop landscapes. His approach presumes that the world we create and the objects we collect reflect our point of view, which is inevitably subjective and particular.

December 2005
Tracking and Tracing Installation
An influential film critic and writer for periodicals-including Time, The Nation, and ArtForum-Manny Farber left criticism in 1977 to devote himself full time to painting. Already deeply engaged in art, by 1973 he had moved away from his earlier abstract works into a representational, yet painterly, style. Farber often took a bird's eye perspective of his subjects that flattened the depth of field into intersecting planes of color and referenced his origins as an abstract painter. These color areas are fields for still-life objects and notations. Stationery Series is a visual inventory of the things that were commonly within his immediate field of vision as he worked. Mixed with words like âfears,â âfail,â and âclear,â the ink bottles, erasers, and stubby pencils in Farber's artist toolkit represent a subjective and intimate visual diary of his everyday life.
Starting in the 1960s Norton S. and Barbara Walbridge began a vigorous, long-term program of giving artworks to build the SDMA collection, particularly in the areas of Modern and American art. In addition to continuing to support SDMA's contemporary acquisitions by funding purchases, Ms. Walbridge's most recent contemporary donation in 2001 included this work as well as String Bean Leaves I (1965-1966) by Ellsworth Kelly, and Cut Throat (1971) by Sam Francis.
Last Updated: 3/19/2019

Your current search criteria is: Object is "Ad Sheet with Yellow Thayer Box".