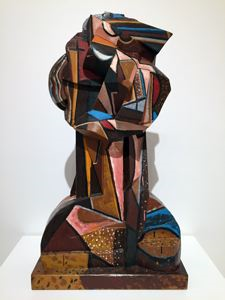 December 2004
Human Presence: Works from the Museum's Collection
Italo Scanga
In the work of Italo Scanga traditions and artistic sources combine to create a layered and diverse body of work. Ranging from 14th century Italian mural painting to carved wooden statuary from Thailand, his eclectic sources remain visible while also fusing into a recognizable personal and idiosyncratic style. Variously described as âArte Povera,â âPop,â and âCubist,â the painting, sculpture, collage, and installation works of this prolific artist elude easy classification. Nevertheless, the immigrant's nostalgia for a shared cultural history built on a long past, rich with history and folklore, permeated his production while also placing him as the constant outsider and distanced observer. Scanga immigrated to the United States from Italy in 1947 and, after serving in the US army during the 1950s, began a distinguished career as an artist and teacher that took him to the University of California, San Diego (UCSD), where he was a noted and beloved teacher from 1976 until his death in 2001.
Assembled from found objects and materials such as wood, cardboard, and small metal fragments, Scanga's sculptural work manifests deep affection for the accumulated products of human endeavor, regardless of their monetary or aesthetic value. Rejecting the artificial, he imbued those objects with a sense of his own fears, memories, and history by merging several pieces into one, and often by painting another picture on top of them with an expressive and vigorous brush that sometimes negated the form beneath to expose stratified narratives. The series of wood and bronze Heads (1982 to 1986) are painted in tones varying from light pinks and browns to jewel-like oranges, blues, and reds. These painted surfaces redefine and reconfigure the sculptural structure below. Applying both the Cubist sculptural principles and painting strategies in one work, Scanga opened up this established style to a new subjective expressivity. His appropriation of the conventions of cubism confers on these Heads the status of iconic character portraits that reveal, in their primitive eloquence, the tensions and contradictions of the contemporary self.
Last Updated: 00/00/00

Your current search criteria is: Object is "Head".