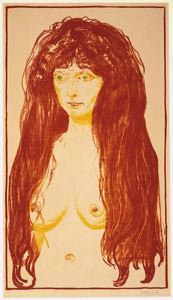 Best known for his iconic image of The Scream, Munch was older than most of the German Expressionists and was already well-established as an artist by the time that he arrived in Berlin in 1892, where he remained until 1908. His art, revolutionary in both style and subject matter, was one of the primary influences on the younger artists in Berlin. Indeed, a work such as The Scream, painted during Munchâs time in Germany, could even be considered the prototype for Expressionismâs subsequent development.
Munch was also a master printmaker and made more than 800 prints in a variety of techniques. This large, impressive lithograph, printed in three colors, is representative of his abilities. Like many of Munch's images of women, The Sin follows the popular fin-de-siÃ¨cle trope of the femme fatale with her long tresses, blank stare, and full breasts enticing the male gaze.
Last Updated: 7/26/2012

Your current search criteria is: Object is "The Sin".