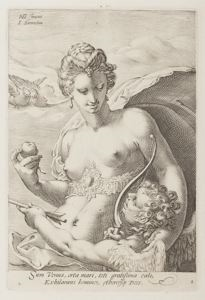 Jan Pietersz Saenredam
Netherlandishâ¢ ca. 1565â1607
Venus
(after Hendrick Goltzius)
Engraving â¢ ca. 1602
Venus, the Roman goddess of love and beauty, is shown
here in half length. She was the daughter of Jupiter and
Dione, and traditionally shown born from the foam of the
sea. Though married to Vulcan, she was well-known for
her entanglements with other lovers, both god and mortal.
Here she is accompanied by Cupid (Eros), her son by the
war god Mars. Her affair with the mortal Anchises resulted
in the birth of the great Trojan hero, Aeneas. In this image,
she holds a golden apple, a reference to the Judgment of
Paris, which set off the Trojan War.
Gift of Norman Leitman and Todd Butler, 2004.177
Last Updated: 5/6/2021

Your current search criteria is: Portfolio is " Prints and Drawings" and [Object]Display Artist is "Jan Pietersz Saenredam".