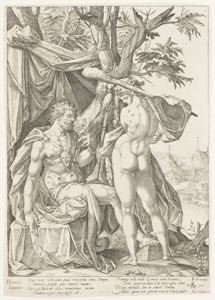 Anton Eisenhoit
German â¢ 1553/4â1603
Hercules and Omphale
(after Bartholomeus Spranger)
Engraving â¢ 1590
The Delphic oracle ordered Hercules to serve the Lydian
queen Omphale for three years, during which the two
became lovers. Hercules submitted to her requests,
including spinning wool and other traditionally female
roles. He also relinquished his signature lion-skin and
club to Omphale and instead dressed in her clothing
as part of his penance. The last line of the inscription
reads âLove conquers him whom Mars will not be
able to conquer.â
Gift of Norman Leitman and Todd Butler, 2004.190
Last Updated: 5/12/2015

Your current search criteria is: Object is "Hercules and Omphale".