The Triumph of Pan 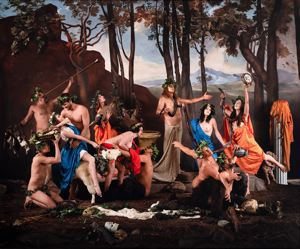 The Triumph of Pan

January 2006
Intervention
Eleanor Antin's second series based on the ancient world, Roman Allegories, 2004, features a traveling troupe performing classic myths. Antin's idyll is unmistakably allegorical, and this is the source of the work's interest. The Triumph of Pan (After Poussin) is a âcopyâ of Nicolas Poussin's 1636 painting of the same name, but with the tongue-in-cheek wit of a trickster laying claim to the bacchanal with all its characters in their fanciful poses. Antin's photographic version incorporates a painted backdrop copy of Poussin's background. To that she adds actors drawn from local talent-friends and colleagues, actors and models- from the San Diego area.
Several literary and visual references are combined within the mise-en-scÃ¨ne of this pagan celebration. Nymphs and satyrs with goats carouse before Pan, the god of woods and fields associated with fertility and Bacchic ritual. The instruments played, the sacrificial deer, and the props in the foreground are either attributes of these figures or linked with such rites.
Poussin is regarded as one of the most important landscape painters of the seventeenth century for his ability to integrate figures into a natural setting. Writing about this Poussin painting, the art historian T.J. Clark has written: âIn particular, the question of human (and nonhuman) standing and falling, and the whole relation between the realm of upright desires and purposes and the terrain underneath on which that desire is planted-all this is imagined differently. No more magnificent bipedalism, no more feeling eternally for one's center of gravity.â With her use of stuffed animals and plastic props, Antin invites us into this unbalanced world with her own stab at unsettling gravity.
Eleanor Antin has worked in film, video, photography, installation, writing, and performance since the 1960s, often using fictional characters and appropriated narratives to invent histories. Born in New York City in 1935, Antin received a Guggenheim Foundation Fellowship in 1997 and a Media Achievement Award from the National Foundation for Jewish Culture in 1998. She has had numerous one-woman exhibitions at several museums including the Museum of Modern Art, the Whitney Museum of American Art, the Wadsworth Atheneum, and a major retrospective at the Los Angeles County Museum of Art in 1999. She has lived in San Diego since the mid-1970s and was a professor at the University of California, San Diego, from 1975-2002.

July 2008
Eleanor Antinâs The Triumph of Pan (after Poussin) is an allegorical copy of French artist Nicolas Poussin's 1636 painting of the same name. She has executed it with the tongue-in-cheek wit of a trickster laying claim to the subject of the bacchanal with all its characters in their fanciful poses. Poussin is known to have created small wax or clay figurines that he would move around and then arrange into a composition. The figural arrangements in these studies were then adapted to his paintings. In contrast, Antinâs figures stand out from the painted background and props as living beings framed by still lifes. Nymphs and satyrs with goats carouse before Pan, the god of woods and fields associated with fertility and Bacchic ritual. The instruments played, the sacrificial deer, and the props in the foreground are either attributes of these figures or linked with such rites.
Last Updated: 6/19/2015

Your current search criteria is: Object is "The Triumph of Pan".