The Prodigal Son with the Swine 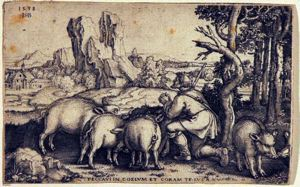 The Prodigal Son with the Swine

December 2007
Designs on Each Other: Indian Paintings and European Prints
Beham was a virtuoso engraver who flourished in Frankfurt between 1520 and 1540 and drew much inspiration from the work of his elder, Albrecht DÃ¼rer (1471â1528). This engraving depicting one of the most popular parables from the Gospel of Luke in the Christian New Testament was produced at the height of Behamâs career and is one of his most famous works. A printed edition of this engraving made its way to the Persian court of Shah Abbas, the ruler of the Safavid dynasty in Iran, where it was copied by a court painter.
Last Updated: 11/23/2011

Your current search criteria is: Object is "The Prodigal Son with the Swine".