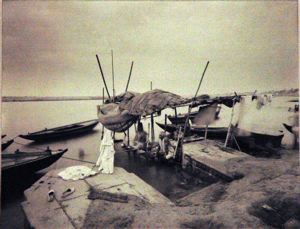 October 2007
Going Places: A Series on the Travels of Artists, Objects, and Tastes between Asia and the West
Now known as Varanasi, the city of Banaras in northern India is a place of deep religious and cultural significance, as it is the venerated pilgrimage destination for followers of Hinduism and a center for religious studies. It is believed that by dying there, one would be released from the cycle of rebirth. This holy city is situated on the banks of the river Ganga (Ganges), where pilgrims perform ritual ablutions. Connor depicts a quiet personal moment in the daily activities that take place on the river. This photograph belongs to Connorâs project begun in 1967, during which she explores the connection between nature and the ancient, spiritual environments, and the way these aspects revealâfor exampleâIndia today. Connorâs prints have undergone gold toningâa process which modifies the color of the image, popularized by the influential French photographer Gustav Le Gray in 1850. When the photograph is produced on printing-out paperâwhich was coated with silver chloride set in a gelatin emulsionâit is placed in a bath of gold chloride. During this process, the size and shape of the silver particles are changed through the replacement of silver atoms by gold atoms, thus yielding a rich, reddish brown tone. Because the toning process is dependent on many variables, such as the temperature and pH strength of the gold toning bath, each print is unique and never looks like another.
Last Updated: 2/22/2021

Your current search criteria is: Portfolio is " Photography" and [Object]Period/Reign is "Modern and Contemporary" and [Object]Display Artist is "Linda Stevens Connor".