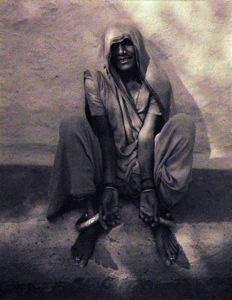 October 2007
Going Places: A Series on the Travels of Artists, Objects, and Tastes between Asia and the West
Like her teacher, the iconic American photographer Harry Callahan (1912â1999), Connor works with an 8-by-10 inch large-format view camera, which weighs approximately thirty pounds. Although bulky and cumbersome, this kind of camera enables the photographer to control every step in the taking of a photograph and yields images with rich and crisp details. She places the 8-by-10-inch sheet negative in direct contact with printing-out-paper (paper coated with silver chloride set in a gelatin emulsion, commonly used before 1900) and exposes it to sunlight. The image is formed by action of light and without the aid of chemical development. The seated womanâs direct gaze, sweet smile and open gesture reveals the thoughtful and considerate rapport Connor must have established with the subject prior to taking the photograph. Connor has devoted over 30 years exploring ancient sites with strong spiritual associationsâsuch as rock monuments, caves, and templesâin the American Southwest, Egypt, Ireland, Mexico, and Peru. She is also very interested in the people who inhabit these places, and this photograph was taken during an early visit to India and Nepal from 1979 through 1980.
Last Updated: 10/17/2007

Your current search criteria is: Portfolio is " Photography" and [Object]Period/Reign is "Modern and Contemporary" and [Object]Display Artist is "Linda Stevens Connor".