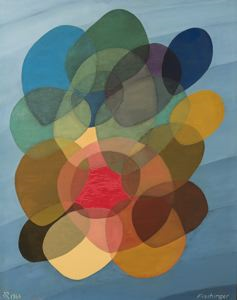 Oskar Fischinger is best known for his work as a filmmaker, and particularly for his pioneering films made in an abstract, non-figurative mode. As the Nazi regime overtook his native Germany, however, the censorship of Fischingerâs work and his own personal opposition to the regime led to his departure for the United States. He settled in Hollywood, where he attracted the attention of film director Orson Welles and worked on Walt Disneyâs film Fantasia. Fischinger nonetheless continued to have difficulties in finding an audience for non-figurative films, and during the last two decades of his life devoted himself to painting, pursuing the types of abstraction he had previously employed in his films.

In Balls, #16 Fischinger depicts vivid circles that ellipse and meld with one another evoking a transcendental state. The composition reflects both his growing interest at the time in Eastern religions and his lifelong interest in music and pure abstraction. The forms which appear to float in space suggest motion and the passage of time.
Last Updated: 4/2/2015

Your current search criteria is: Object is "Balls #16".