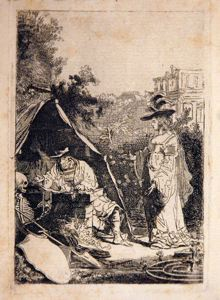 The Hour of Death

The Hour of Death was attributed to Rembrandt by early cataloguers, although the uniform handling of line, lacy foliage, and abrupt tonal transitions all mark it as Bol's work. When Pierre Francois Basan published his Recueil de Quatre Vingt Cinq Estampes Orginales in the late 18th century, he still believed it was by Rembrandt. Most of the prints included in Basan's Recueil were posthumous impressions made from Rembrandt's own copper plates, which Basan sometimes reworked. In a few cases, when Basan could not find Rembrandt's original plate, he had new copper plates made as substitutes. This is one of those examples, which are copies rather than states or impressions of the original print. Most easily identified by the blank cartouche at lower left, which distinguishes it from Bol's own print, this copy has often been mistakenly identified as the work of Bol himself.
Last Updated: 3/25/2010