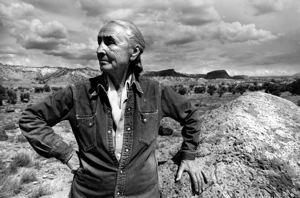 Newmanâs created many portraits of American artists such as Frank Stella (b. 1936) and Milton Avery (1885â1965). In addition to his well-known portraits of artists, Newman also photographed actors and politicians. His work often appeared in popular publications such as Life magazine. This photograph of Georgia OâKeeffe is especially iconic because it positions her amid the natural terrain that she connected with and painted so often. The rich texture of the rock on which she rests her hand is indicative of the simultaneously raw and awe-inspiring landscape of New Mexico. Newman took several powerful photographs of OâKeeffe when he visited her in 1968, but this was not the first time he documented the artist. In 1944, he completed a portrait of OâKeeffe and her husband Alfred Stieglitz (1864â1946).

October 18, 2914
Anita Feldman, Deputy Director of Collections and Exhibitons
Arnold Newman
American â¢ 1918â2006
Georgia O'Keeffe, painter, Ghost Ranch, New Mexico
Gelatin silver print â¢ 1968
Georgia O'Keeffe (1887â1986) was one of the most significant painters active during the twentieth century. In 1917, Alfred Stieglitz held an exhibition of her work at 291 Gallery in New York. Her paintings, influenced by symbolism, abstraction and photography, used nature as their principle subject. From 1929 on, she found inspiration in the landscapes of the south- western U.S., working from home on Ghost Ranch in New Mexico. OâKeeffeâs paintings Barn in Snow and Pink Shell with Seaweed are exhibited elsewhere in this gallery.
Gift of Cam and Wanda Garner 2010.98
Last Updated: 12/10/2020

Your current search criteria is: Portfolio is " Photography" and [Object]Period/Reign is "Modern and Contemporary" and [Object]Display Artist is "Arnold Newman" and [Object]Obj. Type is "Photographic prints".