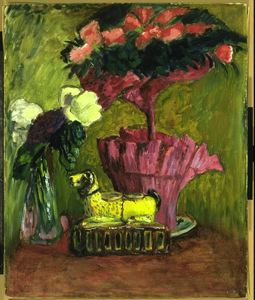 Together MÃ¼nter and Wassily Kandinsky formed Der Blaue Reiter in 1911, which
was joined by Alexei von Jawlensky, Franz Marc, Paul Klee, Marianne von
Werefkin, and August Macke. Their ideas about the movement, interactions,
and spiritual sensations of color and shape were articulated in Kandinskyâs
publication Concerning the Spiritual in Art the following year. Here the painting
is less about the subject represented than it is a study of the psychological and
spiritual sensations produced by juxtaposing intense colors and shapes

Gabriele MÃ¼nter
Gabriele MÃ¼nter
German â¢ 1877-1962
Alemana â¢ 1877-1962
Still Life
with Porcelain Dog
Oil on board â¢ 1911
The old genre of still life became one of the most common themes of modern painting, perhaps because artists appreciated the possibility of casting everyday objects in distinctly unfamiliar avant-garde styles. The French Cubists famously celebrated the objects of cafÃ© culture: newspapers, liquor bottles and glasses, and musical instruments. In this and other canvases, however, MÃ¼nter chose to create still-life compositions from objects found in modern bourgeois interiors. In this case, the composition includes a figurative porcelain inkstand and a plant whose pot is in a bright paper wrapping. Yet, that violet-pink wrapping is a jarring juxtaposition with the coral pink flowers and the acidic green of the background. MÃ¼nter seems intent to stress to the viewer the importance of color and, perhaps also, the evident lack of taste in modern bourgeois life.
Bequest of Earle W. Grant, 1972.143