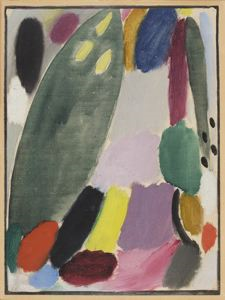 This painting is part of the same landscape Variations series as the Large Variation also exhibited here but was painted a few years later. When juxtaposed with the earlier work from the series, one can see how the trees, path, fields, and horizon line have become simple planes of color and flat shapes in the later painting. Describing these paintings, Jawlensky wrote, "Nature, which I saw before me, only prompted me. And that was a key that unlocked this organ [in my heart] and made it sound. At first it was very difficult. But gradually I came to have no difficulty in finding through color and form what was in my soul... I painted a great many pictures, which I called âVariations on a Landscape Theme.â They are songs without words.â
Jawlensky conceived of this painting as part of a triptych, along with his Variation: Enlightenment and Variation: Powers of the Spirit. The works were separated in the 1950s and the present whereabouts of the other two panels are unknown.
Last Updated: 7/26/2012

Your current search criteria is: Object is "Variation: Inclination".