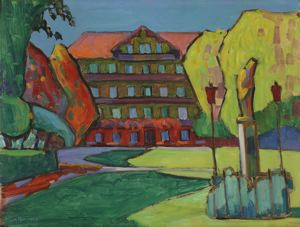 Gabriele MÃ¼nter decided at an early age to become an artist, but she was denied admittance to the German academies because she was a woman. She enrolled instead in Munichâs Phalanx School, where she soon became attached to the schoolâs director, Vasily Kandinsky. The two became companions, and MÃ¼nter would eventually be one of the founders of the Blaue Reiter. In contrast to Kandinskyâs shift towards abstraction, MÃ¼nter remained a representational artist. Her landscapes and still lifes in the years before 1910 are characterized by planes of bright colors, often applied with the palette knife as well as the brush. Many of her works from these years depict the landscapes of small Bavarian towns like Murnau and Tutzing, places untouched by industrialization.
Last Updated: 2/12/2019

Your current search criteria is: Object is "Tutzing".