Black Nude with a Sailor 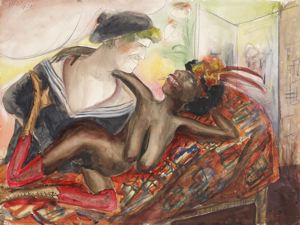 Black Nude with a Sailor

Otto Dixâs career began in Dresden, where he emulated the slightly older artists of Die BrÃ¼cke, but he came into his own as an artist during the war and afterwards. Much of his work focuses on the decadence of postwar Germany and depicts war profiteers, prostitutes, crippled veterans, and sexual violence. Prostitution proliferated in Germany after World War I, when poverty and widowhood left many women with no other recourse for survival. In Dixâs caustic view, a brothel scene like the present work is the very symbol of social depravity and corruption. The hulking sailor on leaveâa familiar subjectâseems about to transfer the violence of war into sexual aggression, despite the leering grins on the faces of both figures.
Last Updated: 7/26/2012

Your current search criteria is: Object is "Black Nude with a Sailor".