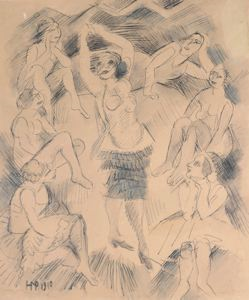 Pechstein produced numerous images of dance in the years before World War I. Some showed European cabaret performers, while others, reflecting Pechsteinâs extreme interest in non-Western culture, were based on dances by African performers that Pechstein saw in ethnographic displays held in Dresden and Berlin. In all of these images, his key aim was to capture the abandon of figures who have given themselves over to the power of the music, in deliberate contrast with the carefully controlled habits of the ârespectableâ modern Germans. Moreover, while figure painting and drawing were a central part of Die BrÃ¼cke, figures were not studied in traditional academic poses; instead, early Expressionist drawings were more interested in studying the human being engaged in natural movements. This drawing is a study for a lost painting also made in 1910.
Last Updated: 7/26/2012

Your current search criteria is: Object is "The Dance (recto)".