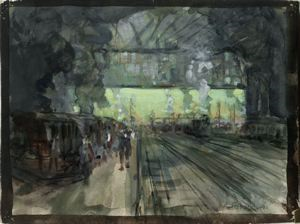 Winter Evening in the Railway Yards

October 18, 2014
Anita Feldman, Deputy Director of Collections & Exhibitions
Charles Reiffel
American â¢ 1862â1942
Winter Evening
in the Railway Yards
Watercolor on paper â¢ 1910
For Charles Reiffel, recognition as a painter was late in coming. A native of Indianapolis, he spent much of his career as a lithographer, but his true interest was painting. Other than a brief stint at the Academy of Fine Arts in Munich, Germany, he was largely self-taught. After his return from six years working and studying in Europe, he continued employment as a lithog- rapher while slowly establishing a reputation as a painter. After a dozen years painting in Connecticut, Reiffel settled perma- nently in San Diego in 1925 at age sixty-three and proceeded to become one of the leading figures of the plein air school of landscape painting in Southern California, developing a unique style that blends aspects of Post-Impressionism and Expressionism.
Gift of Mrs. Alfred R. Mitchell
1977.17
Last Updated: 12/19/2019

Your current search criteria is: Portfolio is " American Art" and [Object]Display Artist is "Charles Reiffel".