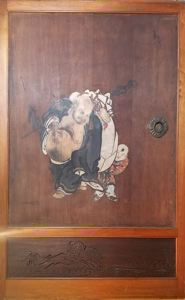 The Japanese room took a lot of space to be exhibited so it was dismantled and stored in the vaults shortly after its initial installation. Finally, it was deaccessioned in May 1982 except for the four wonderful fusuma which we still enjoy on a rotating basis today.


-------------------------------------
November 2004
Past in Reverse
These painted panel doors were once in the home of a wealthy lord (daimyo) who was a scion of the Tokugawa shogun clan. The portly and affable figure of Hotei, a popular Buddhist divinity associated with prosperity and happiness, has resonances with Hung Yu's irreverent drawing of the âHappy Buddha.â In this characteristic rendition of Hotei, he carries a large bag filled with provisions for his travels, tied to a long stick, and he playfully interacts with the two children. While he has been particularly well-known in Japan since the seventeenth century, he was originally a sixth-century Chinese Buddhist priest, and an example of a legendary figure who crossed national borders of East Asia.

The painting is accented with raised and textured sections achieved through the use of gesso underneath the pigment. Further texturing is seen in the horizontal wooden panels below with lions and bamboo, here effected by burning the imagery into the wood. Blind contemporary artist Takayuki Mitsushima uses textured drawings on a series of small panels in his work, which conveys the experience of his journey through urban spaces. A sense of traveling through space is evident in the paintings on the doors, which are two panels in a series of eight. The gesture of the boy on the door resonates with the act of touching so central to Mitsushima's work.
Last Updated: 5/16/2020

Your current search criteria is: Object is "Painting on fusuma (sliding door); Hotei and child (recto)".