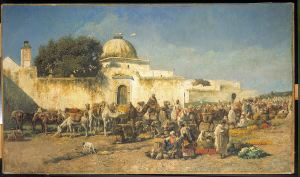 Edwin Lord Weeks
AMERICAN 1849â1903
MARKET SCENE AT MOGADOR
OIL ON CANVAS, 1881
A son of wealthy parents, American artist Edwin
Lord Weeks was encouraged to follow his interests
in travel and painting. Thus, he studied in Paris with
LÃ©on Bonnat, an artist in the circle of French Orientalists,
and traveled extensively throughout the Middle East
and North Africa. He spent several months in Morocco
during the course of two long trips in the late 1870s,
making sketches that formed the basis for many later
paintings.
Mogador is another name for the city of Essaouira,
located on Moroccoâs western coast. It functioned as
the harbor for the inland city of Marrakesh.
GIFT OF MR. JOHN G. PICKARD, 1983.35
Last Updated: 4/6/2020

Your current search criteria is: Object is "Market Scene at Mogador".