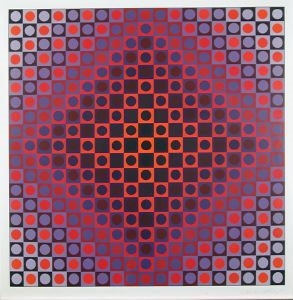 Decermber 2004
Human Presence: Works from the Museum's Collection
Victor Vasarely
In 1948 Victor Vasarely began an exploration into the means by which the eye reads particular colors and geometric forms as surface movement or depth perception. His theoretical writings, as well as the design system elaborated in his fifty year long investigation, laid the foundation for the Op Art movement of the 1960s. As the name indicates, Op Art explores optical effects and illusions through experimentation with abstract geometric patterns that cause the eye to have certain automatic ocular responses to particular color and line combinations. Like the younger artists he would influence, Vasarely saw the viewer's participation as an essential part of his pictorial process, for it is the active viewer who, by attentiveness to his or her physiological visual responses, activates what Vasarely called âkinetic plasticity,â or the physiological effect by which the eye is forced into a constant fluctuation of stimuli when confronted with certain contrasting color and form combinations. As the eye attempts to find a point of balance, a complex visual process develops which the mind understands as movement and/or depth, despite the apparent flatness and abstraction of the forms depicted.
Permutations (1971) is part of a series of paintings and works on paper made from the early 1960s to the 1970s. The screenprint exemplifies Vasarely's concept of the âplastic unityâ essential to the perception of kinetic and spatial effects in his work. âForm and color are one,â Vasarely wrote in 1955, adding, âform can only exist when indicated by a colored quality. Color is only [a] quality when unlimited in form. The line [â¦.] does not engender form-colors, it results from their meeting. Two necessarily contrasted form-colors constitute plastic unity.â Each serialized element in Permutations is composed of a circle within a square defined by varying contrasted colors. The colors making up each plastic unit gradually metamorphize from light to dark, or vice versa, shifting diagonally from the corners of the square to the center, passing through a mid-point where both colors, although different in hue, are equal in tone. The subtle visual shifts in Permutations give a sense of depth with slight vibrating movement as the eye moves across the surface of the piece.
Last Updated: 00/00/00

Your current search criteria is: Object is "Permutations".