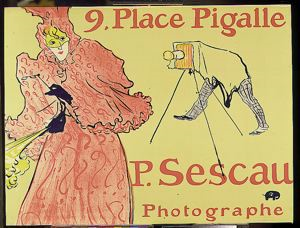 Since its invention in the early nineteenth century, photography had offered new perspectives on the modern city. The portrait photographer Nadar had used a hot-air balloon in 1889 to take aerial pictures of Paris and the newly completed Eiffel Tower. Lautrec, however, takes a less elevated view of his friend the photographer Paul Sescau. Carousing with Lautrecâs cousin, Sescau is depicted on the prowl at the Moulin Rouge in a lithograph entitled The Promenade (also exhibited in this gallery). Sescau had a reputation for luring young ladies with his photography and is fused in this poster with the leering lens of his camera.
Last Updated: 3/28/2011

Your current search criteria is: Object is "The Photographer Sescau".