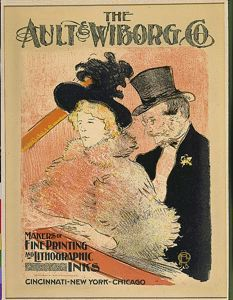 At the peak of his poster production and the height of his reputation, Lautrec received his sole American commission, from a Cincinnati-based manufacturer of lithographic inks. This relatively small-scale poster is unique also among the artistâs oeuvre in that it is a zincographâits five colors printed from zinc plates rather than lithographic stones. This was a necessary accommodation, owing to the transatlantic journey the plates would have to make to the printer. It was unusual for Lautrec, who took a keen interest in every step of the production process (from the selection of colored inks to the printing of trial proofs), to be absent from this final phase. While the models for this fashionable concert-going couple look distinctly Parisian, the text was an American addition, laid over Lautrecâs design.
Last Updated: 3/28/2011

Your current search criteria is: Object is "At the Concert".