Homage to the Square: On Dry Ground 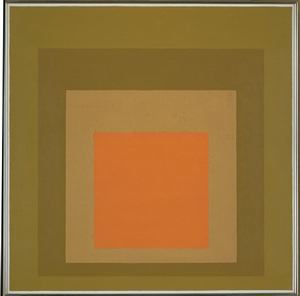 Homage to the Square: On Dry Ground

Josef Albers worked on his Homage to the Square series for twenty-six years, from age sixty-two until his death. This particular painting falls at the midpoint of his engagement with this formal subject matter. Across many of Albersâs compositions, the boldness and gradation of color and the emphasis on basic geometric form make his work highly recognizable. The artist arranges his color tones within box shapes. Albers came to the United States from Germany in 1933 and brought with him design ideas associated with the Bauhaus, where he had been both a student and a teacher. He taught at Black Mountain College from 1933 to 1949 and was head of the design department at the Yale University School of Art from 1950 to 1958. Albersâs influence as a painter was rivaled by his influence as a teacher.
?
October 18, 2014
Anita Feldman, Deputy Director Collections & Exhibitions
Josef Albers
American, born in Germany â¢ 1888â1976
Homage to the Square: On Dry Ground
Oil on board â¢ 1963
The Bauhaus in Weimar was where Albers completed his artistic education early in the 1920s, and he was one of the first Bauhaus graduates to become a master teacher at the school where he remained through its moves to Dessau and Berlin in 1933. When the Nazis forced the closure of the Bauhaus, Albers emigrated to the United States, where he taught at Black Mountain College in North Carolina before becoming chair of the Design program at Yale University. Homage to the Square: On Dry Ground is one of a series of variations of the square-within-a-square that Albers made from 1950 until his death, as part of his ongoing investigation of the properties and interactions of colors.
Gift of Mr. and Mrs. Norton S. Walbridge
1991.8
Last Updated: 5/7/2019

Your current search criteria is: Object is "Homage to the Square: On Dry Ground".