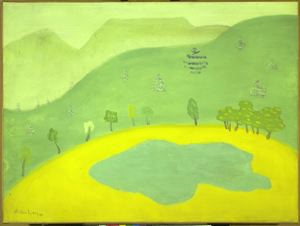 Milton Avery chose unusual color combinations and was drawn to flat planes of color in his representations of both landscapes and figures. Averyâs distinctive approach to painting defies identification with specific movements and creative trends. In Pool in the Mountain, the green, yellow, and blue hues that define the landscape work harmoniously together. The artist plays with perspective as the tiny trees that dot the landscape have a disproportionate relationship to the immensity of the pool, its surrounding territories, and the enormous mountains. In the year that Avery completed this painting, he spent the summer with his family in Woodstock, New York. Avery was a longtime resident of New York and was influential to a subsequent generation of artists, in particular the painter Mark Rothko (1903â1970), who frequented Averyâs studios in New York. By his sixties, Avery was a nationally recognized figure.
Last Updated: 7/9/2013

Your current search criteria is: Object is "Pool in the Mountains".