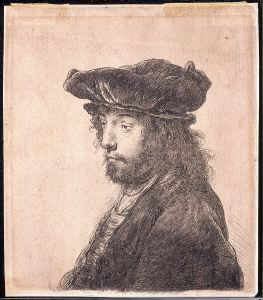 This is one of a series of four fanciful character studies conventionally known as the "Oriental Heads." The four heads were first etched by Jan Lievens (1607-1674), who shared a studio with Rembrandt in the early 1630s. Rembrandt then copied the heads, taking the general form of each man but devising new systems of lines and cross-hatching to fill out the figure.

It was once suggested that Bol, rather than Rembrandt, made the copies and that the "Rembrandt geretuckert" (Rembrandt retouched) signature on three of the four prints in the series referred only to Rembrandt's final work on the plates. The style of the works, though, is Rembrandt's own, and the prints are now universally thought to be wholly his work. They are, of course, among the works that served as formative models for the young Bol.
Last Updated: 8/21/2018

Your current search criteria is: Related to "Rembrandt Harmensz van Rijn" and [Object]Obj. Type is "Etching".