A Gathering of Princes 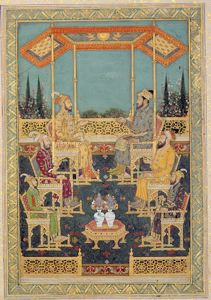 A Gathering of Princes

SUBJECT
Seated on gem-studded thrones with golden footrests, six princes face one another in a hieratic array. Above the two at the top is a canopy with the imperial Mughal insignia of birds of paradise and a sun. The two princes at the top are identified by inscription as Dara Shikoh, Shah Jahanâs eldest and most beloved son, and Shah Shuja, his second son. They do not resemble other known depictions of these two sons of Shah Jahan, but, by 1680, they had both been dead for more than a decade. Below these two, on the left in a purple robe is Muhammad âAzam Shah, one of Aurangzebâs sons who served as the governor of Gujarat. Opposite him is Aurangzeb, recognizable by his deep set eyes. The two smaller figures are not identified.

STYLE
The individuals are rigidly arrayed in profile, with no real engagement, despite the gesture of discussion seen in the top four figures. The attitudes are nearly identical, but formal symmetry has dictated that the figures on the left side of the picture gesture with their left hands, unlikely in a culture where the right hand is favored. The two top figures are slightly larger than the next two who are larger than the two below them. Was it symmetry alone that required two vases to be shown rather than one? The picture is signed on the foot of the left of two blue-and-white vases by an otherwise unknown artist. The quality of the painting is very high with patterns, jewels, and even the landscapes on the Chinese blue-and-white vases carefully rendered. Contrary to the facts of history, this painting shows Aurangzeb taking his place below his elder brothers. Aurangzeb claimed he never sought the throne and wished only a life of piety and reclusion. He justified his challenge to Dara Shikoh whom he eventually had murdered on the grounds that his free-thinking elder brother was âchief of the atheists.â Aurangzeb, as a good Muslim, could not stand by and let such an affront to God dishonor the Mughal lineage.

The princes are seated in gem-studded gold chairs with footrests, beneath a brocade canopy with the imperial Mughal insignia of birds of paradise and a sun. This is a puzzling picture, for it is of great quality, signed (on the foot of the left vase) by an otherwise unknown artist, undoubtedly of Mughal princes, but all cannot yet be successfully identified. The two at the top are identified in an inscription as Dara Shikoh and Shah Shujah, both of whom are portrayed in the Celebration of Shah Jahan's Birthday. Neither figrue in Bhawani Das's painting looks convincingly like the sons in 'Abid's work, but by 1680 Dara Shikoh and Shah Shujah had been dead for more than a decade.
The man in purple on the left is Muhammad 'Azam Shah, one of Aurangzeb's sons who was born in 1653 and served as the governor of Gujarat.

October 2005
Domains of Wonder
Formal portraits of Mughal princes are arranged so that the highest in rank are at the back beneath the canopy, and the youngest are smaller in size towards the front of the picture plane. Mughal painting under Aurangzeb (r. 1658-1707), shown in yellow as a prince, became formal and stiff, but the imperial artists successfully convey the finery and wealth of the Mughal court. The miniscule artist's signature appears at the bottom of one of the blue-and-white Chinese vases.
Last Updated: 9/5/2017

Inscription, On front: painted by Bhawanidas

Your current search criteria is: Object is "A Gathering of Princes".