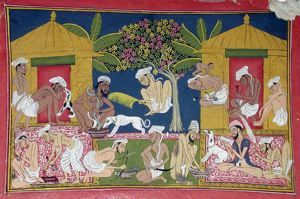 The subject of this painting by the artist Pemji, known for humorous pictures, is similar to the nearby Mughal painting of âbhang-drinkers:â followers of Shiva who take drugs. The stylistic difference is obvious, as is a degree of familiarity by the artist of the actual scene depicted. Pemjiâs far less sophisticated picture is nonetheless the more ârealistic.â These are not demons of someoneâs imagination, but a group of men who look truly âstoned.â Vacant gazes and lines under the eyes of this group register the potent nature of the substance, which is being offered from beaten metal bowls.

The men sit in front of two huts, holding pipes, suggesting the substance involved may be hashish or opium. (many different hallucinogenic plants were used by yogis as part of their practice.) One fellow sitting on a carpet seems to be able to read; he is fanned by a small companion, who looks like he is about to fall over. Two forest-dwellers in the middle try with some apparent difficulty to draw arms against one another. Many figures are slumped forward, attending only to their reveries. One fellow tries to dislodge a monkey from his back. In the manner of many unorthodox Shaivite followers, the men keep dogs, considered in polite society to be unclean scavengers. One dog barks into the ear of a yogi, who seems not to notice. Another dog and a small rodent are attracted to the contents of the bowls.

Your current search criteria is: Object is "Bhang eaters before two huts".