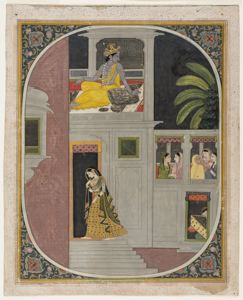 The story of Radha and Krishna is explored in the secular literature of love known as Shringara. This literature often identifies lovers according to types using features such as physical characteristics, situations, experience, and reactions. One of the most bountiful and authoritative of these Shringara texts is the Rasikapriya, by Keshava Das, written in Hindi and compiled around 1591. Its categorization of women into eight basic kinds of heroines provided the structure for many sets of paintings of Eight Heroines, particularly in the Hill States, at courts such as Kangra.

Belonging to a genre of poetry concerned with love and erotica, the Rasraj categorizes women into types of heroines (nakiyas). This painting depicts âshe who goes out to seek her lover,â using the exemplar of Radha, the beloved of Krishna. Radha is about to enter Krishnaâs house; in the upper story of the building, he anxiously awaits her. The text on the reverse of the folio reads in part: âWhen the nay-ika went toward the bed chamber, the fragrance of her body increased her beauty, and her radiance was greater than lightning, lamp, and saffron. . . . Even if she smiled softly, it seemed as if moonlight was spreading every-where. When she was climbing the stairs to go to the bed chamber, the bells on her waistband began to tinkle, and in order to protect the honor of the elders in the house, she felt bashful and bit her tongue.â

The Bhagavata Purana (Ancient Tales of the Lord Vishnu) is the source of some of the most religiously significant and beloved tales from South Asia. These stories are associated with the Hindu god Vishnu, protector of the earth and humanity, who incarnates himself time and again in order to restore cosmic balance.
The content of the Bhagavata is conveyed through a series of dialogues between wise narrators and their curious disciples. The principal narrator is Shukadeva, who starts his recitation at the urging of King Parikshit. Through the course of the Bhagavataâs twelve books, he and other sages relate the stories of Vishnuâs ten incarnations, in which are embedded a particular conception of the cosmos and its creation, as well as notions of how to maintain order in the universe. Along the way, the adventures, battles, romances, and trials of many corollary figures are related. The narrative comes to a conclusion with the death of Parikshit, a summary of the Bhagavata, and an assertion of its primacy among all the ancient texts.
The Bhagavata was passed orally from generation to generation for centuries, until it was written down in Sanskrit, a sacred and literary language of India, sometime around the ninth or tenth century. This is the text that appears on many illustrated manuscripts, sometimes also accompanied by Sanskrit commentaries and vernacular Hindi summaries of the content. Although illustrated versions of the entire text are known and are included in this exhibition, one portion of the lengthy narrative of the Bhagavata became particularly popular for illustration. Focused on Vishnuâs incarnation as Krishna, this section delights in the deityâs boyhood antics and romantic dalliances as it celebrates his endeavors to safeguard humankind.

Inscription, Verso: MatirÄm verse. I am amazed that I was able to find an excellent publication in English, one that includes a translation of the poem in our manuscript. The publication is full beautiful illustrations and illustrated manuscripts, in case you're interested in the material too. It also includes the original poems in Braj alongside their translations in English. Here is the reference I'm citing: Painted Words: Kangra Paintings of Matiramâs Rasraj. Edited by Harsha V. Dehejia and Vijay Sharma. New Delhi: D.K. Printworld (P) Ltd. 2012. (pp. 59-60) Translation from the publication: "When the nayika went towards the bed chamber, the fragrance of her body increased her beauty and her radiance was greater was greater than lightning, lamp and saffron. Her love-afflicted beloved looked attractive on account of his handsome looks and the paraphernalia of love. Even if she smiled softly, it seemed as if moonlight was spreading everywhere. When she was climbing the stairs to go to the bed chamber, the bells on her waistband began to tinkle and in order to protect the honour of the elders in the house, felt bashful and bit her tongue. [195]" Note that our manuscript does not include a verse number at the end, but it does include a heading for the poem and the name of the meter: âExample of a mature woman with a tryst. Kabitt.â [this is the name of the meter] I have attached a short pdf of an excerpt by McGregor on MatirÄm's background in my email.

Your current search criteria is: Object is "Radha goes to Krishna's house at night".