Krishna with his army within a walled city 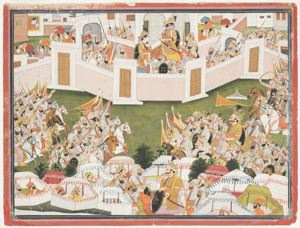 Krishna with his army within a walled city

The Harivamsa is considered an appendix to the Mahabharata and was often illustrated independently of the rest of the text. It consists of three chapters, of which the second deals in great detail with Vishnuâs incarnation as Krishna. This painting belongs to an impressive copy of the Harivamsa made by the artist Purkhu, working in Kangra at the court of Maharaja Sansar Chand (r. 1775â1823). The paintings are characterized by their scaleânot only of the folios themselves, but also of the figures, who dwarf the buildings and landscape around them. There are no verses from the Harivamsa inscribed on the paintings, but labels identify several of the figures within the scene; the reverse of each folio notes the illustrationâs number (this is number fourteen).

Your current search criteria is: Object is "Krishna with his army within a walled city".