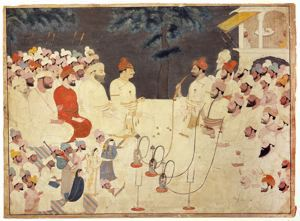 Sansar Chand, ruler of the hill state of Kangra, celebrates the birth festival of Krishna in a special darbar. In the
pavilion at upper right, an idol of the newborn Krishna has been placed on a flower-decked swing.

The king himself sits at the head of the party on the right, wearing a bright orange turban and smoking a huqqa. Two other men in this group have huqqa privileges: they are probably his younger brothers Fateh Chand and Man Chand. Smoking in the presence of the soverign was
strictly regulated.

The men who face Sansar Chand can be identified as group of Muslim nobles. Muslims generally wore their shirts fastened on the right, while Hindus wore similar shirts, but with fastenings on the left.

The undersized servants and dancing girls in the
foreground are typical of the artist Purkhu, to whom this painting is attributed.
Last Updated: 9/5/2017

Your current search criteria is: Object is "Maharaja Sansar Chand receives some visitors".