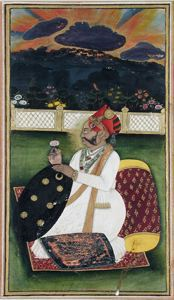 Sukhram painted this posthumous portrait of Gaj Singh, who died in 1787, as a gift for the new Maharaja of Bikaner, Surat Singh (who reigned 1788â1828). The inscription on the back reveals that it was made on the occasion of the springtime festival of Holi, during which revelers boisterously toss brightly colored powders at one another. Perhaps the unusual, exuberantly colored sky parallels the mood of this unique festival.

The inscription on the back states that the artist Sukhram was from the nearby Rajput kingdom of Jaipur, and his name indicates that he is Hindu, rather than Muslim. Evidence from other paintings suggests that the Hindu artists at the Bikaner court were all from Jaipur. The jewels worn by Gaj Singh are especially sumptuous and Jaipuri in style.
Last Updated: 9/5/2017