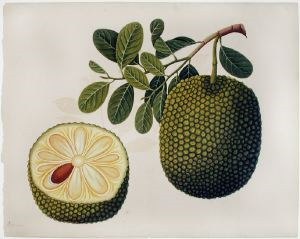 October 2005
Domains of Wonder
Indian artists began to paint meticulous reproductions of animal and botanical specimens on large sheets of imported paper. Such images were enthusiastically commissioned, in the name of scientific documentation, by officers of the British East India Company and their wives.
Not only did artists adopt the new medium of European watercolor, they also referred to Western techniques of modeling. By using color contrasts, the artist deftly created a sense of texture and volume to the durian fruit.
Last Updated: 9/5/2017

Your current search criteria is: Object is "Jackfruit and Foliage".