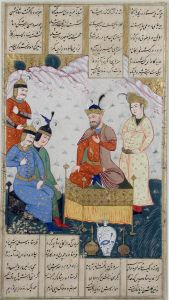 King Faridun receives the envoy of his two sons

June 2006
Asian Reinstallation
One of the three sons of King Faridun had been murdered years before by his two brothers, who have just learned that he had a son. The son of the murdered brother, named Manuchihr, was being raised in the court of King Faridun and was a great favorite of the king.
In this painting, the young prince Manuchihr stands at the right. From his throne, King Faridun addresses the envoy of his wicked sons, who was sent there to bring Manuchihr to them in order that they could confer on him a formal apology and beg his forgiveness. King Faridun sees through the plot, and the text above and below the painting and on the reverse side relates his rebuke:
No one has sought revenge for him as yet
Because I saw the back of fortune bent.
It seemed not good to me to lay my hands
In battle on my own two sons; but now
From that same tree which enemies have felled
A fruitful offshoot has sprung up; for
Like an angry lion, Manuchihr shall come,
With loins girt ready to avenge his sire. . .
Last Updated: 12/6/2021

Your current search criteria is: Portfolio is " Middle East" and [Object]Century is "17th century" and [Object]Country is "Iran".