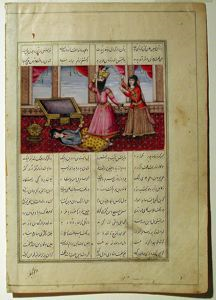 June 2006
Asian Reinstallation
The princess Rudabeh was to become the mother of Rustam, one of Persia's most celebrated heroes. Her marriage to Rustam's father, however, met with grave disapproval from her father, who is shown here in a fit of anger, brandishing his sword while his wife tries to intervene. Eventually he relents, however, and the marriage is allowed to take place.
The text includes the conversation between Rudabeh's parents, when her mother breaks the news to her father, the king, of her forbidden love affair. The style of the painting is typical of works produced in Iran during the Qajar period, when artists favored the use of pink. The figure of the king is modeled after the archetypal Qajar king, Fath-Ali Shah.
Last Updated: 2/18/2022

Your current search criteria is: Object is " King Mihrab of Kabul learns of Rudabehâs affections for Prince Zal ".