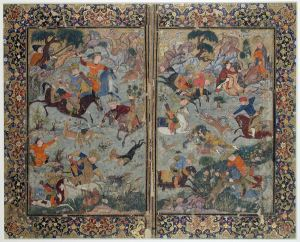 November 2005
Tastes of Asia Rotation
Hunting was a key pastime for nobles and kings of Iran at least as early as the eighth century BCE. In this double-page painting a frenzied group of nobles display their skill in the hunt as they dispatch a variety of prey while galloping on steeds and wielding a range of weapons. The scene, at times perilous for the hunter as well as the hunted, is set within a lyrical Persian landscape with typical golden skies, pastel grounds, and flowing streams.
Last Updated: 9/5/2017

Your current search criteria is: Portfolio is " Middle East" and [Object]Century is "17th century" and [Object]Country is "Iran".