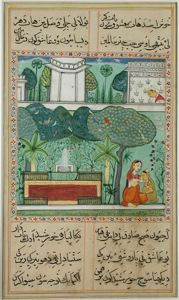 The evil Kali spies upon Damayanti

Originally part of the great Hindu epic the Mahabharata, the Nal Daman is a Deccani Urdu version of the mystical romance of Nala and Damayanti, whose lifelong devotion was destined by the gods. Through the action of the gods, Princess Damayanti, has fallen in love with Prince Nal before she has ever seen him. Her father arranges a contest so that Damayanti can choose the man she will marry from all her royal suitors from throughout the world. Nal, who likewise has fallen in love with Damayanti from afar, comes in hopes of being chosen. After many adventures she finally chooses Nal, and the wedding takes place. The story relates his love for her and his devotion to the gods. Then Kali, the evil genius, also hoping to win Damayanti, having arrived too late for the contest, takes up his abode in the palace garden to await some error in Nal's devotion, which would allow him, jealous as he is, to wreck the couple's happiness. But the error never occurs, and the couple lives happily ever after.
Last Updated: 9/5/2017