A Young Prince in a Family Setting 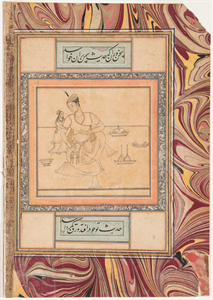 A Young Prince in a Family Setting

November 1991
Myths, Monsters and Maharajas
The Deccani sultanates Ahmadnagar, Golconda, and Bijapur flourished from pre-Mughal times, but all were forced to submit to Aurangzeb by the end of the seventeenth century. Painting from these Muslim kingdoms is indebted both to the Hindu states to the south and to Safavid Iran and the Ottoman empire, with whom the Deccani kingdoms had close economic and cultural ties.
The school and date are assigned to this painting not only because of the style of figure drawing, but because the young prince wears garments and turban of the style of Ahmadnagar around 1575, known in other paintings. His elaborate gold belt is minus the sword that would have been put through the lower part. This sweet drawing captures a moment of universal familial feeling. Who has not known the delight of a small child bestowing a hug?

February 2004
Binney Rotation 7
Sultans and Sufis: Paintings from the Deccan
The tender gaze of a young girl, who seems fascinated by his gentle perfection, enhances the idealized beauty of this young prince. Subtlety of line imparts a wonderful sense of delicacy to this touching portrait. The prince is attired in Ahmadnagar court costume of the periodâloose turban, jama with wide lapels, and Central Asian gold purse. While the exact subject of this work remains a mystery, scholars have suggested that it represents the betrothal of two young royals. Certainly the posture of the male figure, which beckons the child forward, suggests an intimate relationship.

October 2005
Domains of Wonder
The unique style of his turban and ornamental pouch establishes the Deccani origin of the young prince.
The youth's elegant, rounded features, however, attest to Persian influence derived from the Deccan's own links to painting centers of the Middle East.
A verse exalting the beauty of the loved one is inscribed in Persian above and below the tender scene. The identity of the miniaturized girl, who lovingly grips the prince's arm, remains unknown.
Last Updated: 9/5/2017

Your current search criteria is: Object is "A Young Prince in a Family Setting".