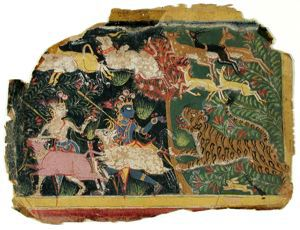 October 2005
Domains of Wonder
Scenes from the life of Krishna are depicted in these pages from a sacred Hindu text, which exemplify the indigenous Indian style just prior to the rise of imperial Mughal painting. Throughout his life Krishna overcomes obstacles, such as the tiger who threatened him in his youth. He prepares to vanquish the demon Naraka as he glides over the imaginatively abstract mountains and the moat that surround Naraka's fortified palace, where he holds his prisoners captive on the second storey.
Last Updated: 9/5/2017

Inscription, On reverse: . . .tigers and lions

Your current search criteria is: Object is "Perils in the Forest".