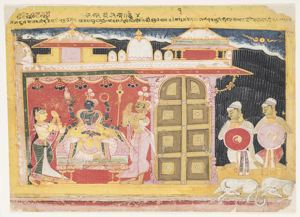 A wonderful child is born, of lotus-like eyes, endowed with four arms, bearing a conch and wielding aloft a mace, a discus, and a lotus, with a great gem beautifying his neck. He is clad in yellow silken garments and possesses the charming complexion of a rain-bearing cloud. He is bathed in the luster of his crown and earrings studded with gems.

Father and mother praise the god with folded arms. He speaks to them gently telling them that he must be saved from the hands of Kamsa. They are to exchange him for a child just born to Yashoda and her husband Nanda in neighboring Gokul. Then, they are to take the child of Yashoda and Nanda as their own and leave him in Gokul free from harm. After speaking, the god turns himself into an ordinary (albeit Blue-complexioned) child.


It was foretold that a son of Devaki and Vasudeva would destroy the King Kamsa. To prevent his doom, Kamsa kept the couple confined in a prison in his palace and put to death the first six children Devaki bore. When she conceived her seventh, it was miraculously transferred from her womb to that of Rohini, who was Vasudeva's second wife. This child was Balarama, later to be Krishna's constant companion.

Devaki's eighth child was Krishna. At his birth on a dark and stormy night, the palace prison was filled with a radiance. The prison guards and their dogs fell into a profound slumber. Krishna appeared as Vishnu himself, seated in splendor, holding his attributes: a conch, a lotus, a chakra, and a mace. Devaki and Vasudeva worshipped him. Devaki said, Oh God, thou art verily Lord Vishnu, who art described in the Vedas as the primordial cause and hence inscrutable, omnific, omniscient. Being of such a nature thou art the abode of security. Do thou save us, who are greatly frightened, from Kamsa, for thou dost always dispel the terror of thy devotees. Then Vishnu took the form of an ordinary new-born babe, before the very eyes of his parents.

When Devaki gives birth to her eighth son, Krishnaâno ordinary infant but rather an incarnation of the god Vishnu, a carefully conceived plan ensures the childâs safety. In this image, the blue-skinned Krishna sits on a lotus throne, holding in his hands Vishnuâs conch shell, mace, discus, and lotus, each a signifier of his divine nature. His father, Vasudeva, and mother, Devaki, stand to either side, offering obeisance to their son. At the center, the prison door is left unchained. Its two guards and their dogs have fallen fast asleep, enabling Vasudeva and Krishnaâs midnight escape to the distant land where Krishna will be raised. This painting comes from one of the greatest surviving early Indian manuscripts, the âIsardaâ Bhagavata. Named after the feudal state in eastern Rajasthan in whose collection it was preserved, the book is esteemed for its exciting and sophisticated illustrations. Its folios include vernacular notes in addition to the Sanskrit text.
Last Updated: 9/5/2017

Your current search criteria is: Object is "The birth of Krishna ".