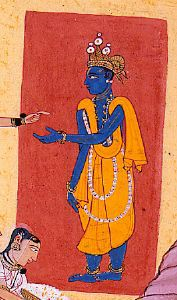 A stamp on the reverse and the salmon-colored border indicate that this painting was kept in the royal library at Bikaner. It belongs to one of the oldest series in the Bikaner collection. The flat rectangle of red behind the blue Krishna is a traditional Indian method of indicating the person who is the object of passionate emotion in the story.

August 2021
Pearls from the Ocean of Contentment
This painting depicts a scene from the adolescence of Krishna, one of Vishnuâs incarnations. Krishna instructed the hungry cowherd boys in his village to seek food from some nearby priests, called Brahmins, but the priests refused to interrupt their ritual. Yet their wives, in their devotion and love for Krishna, dropped everything to bring the boys their most delectable dishes. This story illustrates the importance of devotion to god over the empty performance of ritual.â¯The salmon-colored border and a stamp on the pageâs reverse indicate that the painting was once kept in the royal library at Bikaner.Â

Your current search criteria is: Object is "The Brahmin's wives feed Krishna".